Skip to content
9 Comments on How will Brendan Rodgers Fare At Liverpool?Posted in Premier League, Statistics By By Far The Greatest TeamPosted on August 5, 2012June 30, 2017Tagged Brendan Rodgers, Liverpool 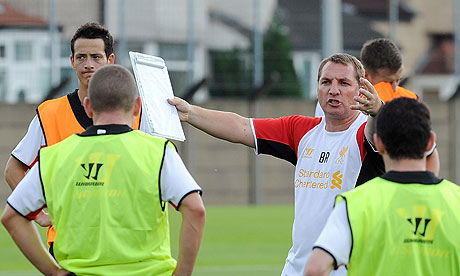 I’ll be honest. I never used to like Brendan Rodgers. I used to think he thought he was special, because of his training under ‘The Special One’, but since he’s taken the helm at Liverpool, I’ve started to like him. For the way he plays his football (I knew this before of course, but I was still under the illusion he thought of himself as special) and the kind of things he’s saying in press conferences. In my opinion, it’s so far so good for Rodgers, but how will he fare, in the long term, at Liverpool?

I think, first of all we need to talk about the situation Liverpool are in, after the sacking of Kenny Dalglish at the end of last season. Liverpool are a good side, with some extremely good players, who had an inconsistent season last year. However, I don’t think they’re average. They had an average finishing, by their standards, but I think if you look deeper, and more specifically at the stats, you will see they did quite well, they were just inconsistent.

On average, they had 55% possession every game, so they dominated the possession, which I’m sure Rodgers will be glad about, as he knows he inherits a squad who can keep the ball. As well as this they had a solid defence, the third best in the league, as well as conceding the third least average amount of shots a game. So, as you can see, there is no problem with the defence, but the attack is different.

Liverpool could create chances at will, with an average 17.6 shots a game, the fourth most in the league last year, yet only managed 47 goals, the 10th worst/best in the league. Creating opportunities to score isn’t an issue but finishing these chances is. This could be fixed, as strikers Suarez and Carroll have now had their first full season, as well as quite a few midfielders who are supplying them, so they could be a bit better this season, now they’ve had more than enough time to ‘acclimatise’. Rodgers has probably gone out to try and solve this by signing young striker Fabio Borini from Roma, who he had on loan when he was manager at Swansea. Borini got 9 goals in 20 starts and had a chance conversion of around 19%, which isn’t too shoddy and should help Liverpool’s fire-power this season.

Now, back onto Rodgers.

The first thing to mention would be his style of play. He likes to play Tiki-Taka football, like Spain and Barcelona famously do. He instilled it into his Swansea players with great results, their midfielders passing stats were amongst the best in Europe and Ashley Williams had some of the best passing stats in the Premier League as well, which shows how they played it from the back. They averaged slightly more possession than Liverpool, with 57.6%, but with Rodgers methods at Liverpool, they’ll probably get more than both of them. If the players buy into his methods, which they should. Rodgers plays entertaining football that is all based around possession and Liverpool have enough technically gifted players to play this way. They have the ‘sweeper-‘keeper’ in Reina, the defender who can play it out from the back in Daniel Agger, the midfielder who can win the ball and pass it on in Lucas and then Gerrard and Suarez to create and score. That’s just the obvious spine, but it is a good spine. These players, in my opinion, will do great with Rodgers methods. Liverpool and Rodgers’ football go together and can only lead to good things. I mean, wasn’t there a song? ‘Pass and move, it’s the Liverpool groove…’

Next, Rodgers has to win the fans over. This is tough at a club the size of Liverpool, as they have lots of fans and more specifically, lots of expectant fans. However, what he’s saying in press conferences has to be winning them over, as it’s winning me over and I’m not a Liverpool fan!

“I want to use the incredible support to make coming to Anfield the longest 90 minutes of an opponent’s life.”

“Whatever it takes to make Liverpool successful, then my life is devoted, it’s all part of the dance.”

A crucial part of how well he will do, will be judged on transfers. Kenny Dalglish’s biggest downfall was probably his transfers, paying extortionate fees for relatively average players. Rodgers won’t be the same. I think Rodgers, in general, prefers to be more shrewd, as I don’t remember him ‘breaking the bank’ for Swansea, or the other clubs he’s been at. His only signing so far is Borini for around £12M, which is decent, considering he’s only 21 and is a good striker.

They’ve also (inevitably) been linked with quite a few players, who would appear to be shrewd buys, in my opinion. The first was Gylfi Sigurdsson, a player whom he had at Reading and on loan at Swansea, who showed his class in his loan spell for Swansea with 7 goals in 18 games. He would have been a great buy for Liverpool, however, he chose to go to Tottenham instead. The next player they’ve been heavily linked with is Gaston Ramirez, from Serie A side Bologna. He’s a 21 year-old attacking midfielder who can play on the wing as well. They have just sold two of their wide players in Kuyt and Maxi and the wings are probably their weakest area. They have Craig Bellamy, Stewart Downing and Joe Cole, then they only have younger players like Raheem Sterling. So if Ramirez can play on the wing, as well as centrally, he’ll be providing much needed quality and versatility. He scored 8 goals and got 4 assists last year for Bologna, which is decent and he’s still only young. If you add Rodgers’ style and the better players he will have around him, it should be a good buy. The only bad thing is it’s reported Spurs also want him, so there’s a chance it could be Gylfi: Episode Two. But, we’ll have to wait and see. The last player I’ve seen them linked extensively with is Joe Allen. There was meant to be an agreement with Swansea that said Rodgers can’t sign any of their players for twelve months, but it seems that has gone out of the window. All the papers are saying Liverpool would pay £12m-£15m for Allen, which has led to the jokes about Liverpool over-paying for average British players. But is that fair? Is Joe Allen average? In my opinion, no, far from it. He has the 9th best pass completion in Europe with 91.2% and completes 60.5 passes a game on average, the 38th best in Europe. He does this for a mid-table Premiership team at the age of 21. If you watch him, he really is great, technically superb and values possession and retaining possession. He is a joy to watch. Then, you have to think about it from Swansea’s position; they won’t want to sell a key-player, with those stats with lots of potential, for cheap. So, I think £12, is a good buy, I know if you look around you’ll see great deals for the same kind of money, but I just rate Allen highly and the stats speak for themselves. Also, he can help implement Rodgers’ style of player into Liverpool, which could be extremely valuable to them.

If they sign the above players, they will have a great starting XI.

Finally, I think the biggest thing that Rodgers will face and have the biggest say in whether he is a success or not at Liverpool is pressure. Will he handle the pressure? He’s done a decent job at the majority of clubs he has been at, but they don’t come with the same amount of pressure as Liverpool. He now inherits a huge club that will expect to compete in the cups and in a couple of years, the league, which is an entirely new situation for him. A bit of pressure has been taken off, as the board have said that top 4 isn’t a minimal target and they want stability first, which is a good way forward. However, there will still be a lot of weight on his shoulders, at Swansea it was acceptable to drop points at certain games, and even be outclassed (although they weren’t very often) but at Liverpool that isn’t acceptable. Dalglish got away with a lot more than any other manager would have because of his status amongst the fans. Dalglish lost 29.7% of the games he took charge of at Liverpool, compared with Roy Hodgson’s 29%, yet the latter was hounded out of the club by the supporters.

So, how will Rodgers fare at Liverpool? In my opinion, he’ll do well. I think he has enough about him to handle the pressure and win over the fans, I think the players are good enough and have the right footballing abilities to play the way he wants to play. So, if you’re a Liverpool fan, I think it’s all shaping up nicely. The future looks bright for Liverpool, let’s see if Rodgers can deliver a bright future in the long term, because what’s the point in hiring a 39 year-old manager without an eye on the long term future at the club.