A comfortable win in the end, which puts England top of the group as Ukraine haven’t played tonight. A good night for the Three Lions, one to forget for Scotland. Thank you for your company tonight, we’ll have a full write up for you tomorrow including the manager press conferences. Cheerio!

89 mins – Great ball from Onomah to find Kenny but his cross is blocked behind for a corner. Three added minutes are signalled

87 mins – Save! Gomez heads from a corner and Fulton reacts superbly to palm it away. That’s followed by Abraham being replaced by Jack Harrison – yes the MLS kid. He’s got 2 minutes.

86 mins – Man of the match is given to Dominic Calvert-Lewin.

83 mins – There was a Scotland penalty appeal at some point. It was waved away. You’ll probably never see it again so don’t worry about it.

82 mins – Sub for England now. Solanke is withdrawn and on comes Ademola Lookman

It was game on for about a minute as Abraham springs the offside trap and has all the time in the world one on one with Fulton. He waits forever before giving Solanke a tap in. Game over this time?

Right, Scotland pull one back out of nowhere. A free kick about 30 yards out is cleared, but when floated back in McBurnie sits Gunn down and squares for Cadden to make it game on

73 mins – Incidentally Kenny has gone in at right back with Alexander-Arnold more advanced now.

69 mins – England’s turn to make a change. Demarai Gray is off to a standing ovation and he’s replaced by Jonjoe Kenny of Everton.

66 mins – Second change for Scotland. Ryan Williamson is on for Dominic Thomas. There’s a further hold up in play as McBurnie is getting treatment on…some part of his body. Can’t tell.

64 mins – Onomah shows great technique to keep a bouncing ball down but it’s a fairly comfortable save for Fulton low down to his left.

61 mins – Lovely skill from Taylor to get to the byline for Scotland but his pullback is to nobody in Scottish pink. England break and Gray finds Calvert-Lewin who flashes one just wide. England will get more on the break here if Scotland have a go

58 mins – Another effort from Scotland, Mallan tries to bend one from distance but it takes one bounce and it’s easy for Gunn.

56 mins – Game is open now. Scotland somehow fail to even get a shot away at one end then Gray beats Taylor and feeds Abraham who has two efforts blocked. The Swansea man limps away…

50 mins – Was it a foul? My first reaction was dive but it seems he clipped himself. Anyway, it’s academic now as it’s 2-0 and England have their tails up

Couple of steps and cooly sends the keeper the wrong way. 2-0 and probably game over.

48 mins – Abraham goes down in the box and the referee gives a spot kick!

46 mins – Oh it really should be 2-0. Onomah makes himself a yard of space inside the box but shoots well over from about 10 yards.

KICK OFF – We’re back underway, with Scotland’s chief threat off and Swansea’s Jack McBurnie replacing him.

Scotland Substitution: Burke off, McBurnie on

All England then, can Scotland mount a come back? They’ve made a change

44 mins – This is a good chance as well. Inswinging free kick and Solanke gets good contact on it under little pressure but he seems to mistime his jump and it loops well over.

42 mins – Half a sniff for England but Onomah’s cross is claimed by Fulton. Cook then tries from fully 30 yards but it’s straight at the keeper

39 mins – It’s played short to Gray who blasts it well over the bar under little pressure. Poor but he may have slipped

38 mins – Nice turn on the left wing by Calvert-Lewin to get himself free from Smith, who hauls him down right on the edge of the box. England have a free kick that is more or less a short corner in field hockey terms

36 mins – From Scotland’s point of view, they hardly press at all and are terrified of overcommitting.

35 mins – What is impressive about this England side is they never go long. Lots of short passes out from the back, it’s good to watch

32 mins – Abraham has a clear sight of goal but his effort from 6 yards is blocked about a yard from the line. It came from another far post corner that was headed back to the striker.

30 mins – The opening half hour has been pretty much all England, they deserve to be in front. Onomah’s goal is worth watching if you can get hold of it

26 mins – Shot on target from Scotland, Dom Thomas cutting inside from the right and curling a shot straight at Angus Gunn.

23 mins – Nice interplay from England on the edge of the box but Calvert-Lewin overruns it and takes a tumble. Still 1-0.

21 mins – Gray has the beating of Taylor time and time again it seems. Watch this space

18 mins – So close to 2-0! Abraham gets a toe on another inswinging cross, this time for Calvert-Lewin, but it hits the post. Then Damarai Gray shoots wide on his left foot. All happening

16 mins – What have Scotland got in reply? Well they’re offside from a free kick for starters

The corner is headed out and Onomah controls on his chest before hitting a dipping half volley that flies over Fulton and in. What a goal!

12 mins – Lovely turn from Abraham to collect Walker-Peters’ inswinging left wing cross but it’s toed behind by the Scotland defender in the nick of time. The resulting corner causes panic as Fulton gets under it but Souttar bails his team out again, twice in the same update. However…

9 mins – Gray hits a cross that swirls behind for what looks like it should be a corner. The linesman, from about 3 feet away, misses the deflection. Right.

7 mins – We’ve got our first Great Escape outing from the band. No goalmouth action of note yet.

3 mins – Nothing to shout about so far. It looks like Gray right, Calvert-Lewin left and Solanke behind Abraham for England.

KICK OFF – We’re off, Scotland kick us underway. Good atmosphere at The Riverside, the locals have really embraced the occasion.

19:40: The players are out and the anthems are being observed 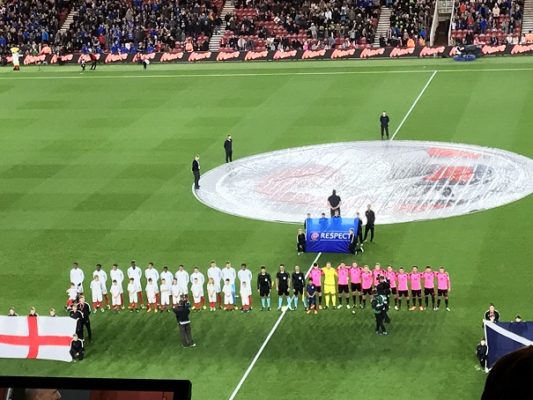 19:35 Here’s a reminder of the two line-ups with 10 minutes to go until kick off

19:30 That England lineup is very attacking. Aidy Bothroyd definitely going for it, though I do wonder if the Scotland team being slightly more settled could make a difference. Incidentally England have finished warming up but Scotland are still out there.

There’s a few players I’m looking forward to seeing tonight. Lewis Cook captained the Under 20 side that won the World Cup in the summer, but he hasn’t quite managed to break into the Bournemouth side yet. Surely it’s only a matter of time? Scotland meanwhile are captained by Oliver Burke, who made a big money move to RB Leipzig in Germany but has now come home to work with Tony Pulis. It looks like Burke is being used a striker here though, rather than his usual wide position.

We’re still in very early days in the world of European U21 qualification, their major tournament occurs every two years so the teams are vying for a spot in the 2019 European Championships. England have collected four points from their two games so far, which means they sit second in the table behind Ukraine only on goal difference. England have already played what looks like the toughest game they will face and came away with a respectable 1-1 draw in the Netherlands. Scotland, due to some odd scheduling, have only played one game to date but that was an encouraging 2-0 win over the Dutch at St Mirren last month. This should be a good contest.

I have tracked it down. Just the two changes though – Smith and Campbell are in for Ralston and Wilson.

18:45 Whilst I pad for time waiting for the team news from tonight’s visitors, here’s the programme cover 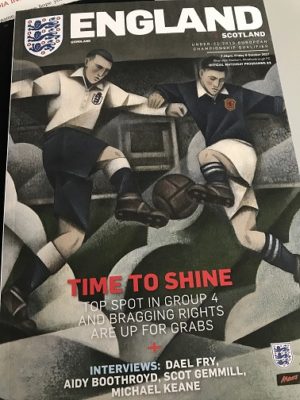 18:40 That means 5 changes for England from the team that beat Latvia 3-0 last month. Gunn, Onomah, Calvert-Lewin, Solanke and Middlesbrough’s own Dael Fry are in at the expense of Woodman, Tomori, Davies (all subs) and the stricken Ojo and Palmer. I’ll get you the Scotland team as soon as I have it.

18:30 We are live at the Riverside Stadium for the Under 21 clash between England and Scotland. We’ll have the team news for you soon but in the meantime, my colleague Craig Thompson has done an excellent preview of the game which I think is the perfect starter to tonight’s main course.