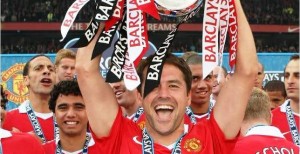 After being a hero for Liverpool fans, Michael Owen’s popularity in Merseyside took a steep nose-dive when he left the club on a free transfer and joined Real Madrid, despite repeatedly claiming he wanted to extend his contract.

To add insult to injury, Owen later joined their hated rivals, Manchester United, and went on to win the record breaking 19th title with them. “They say if you can’t beat them, join them,” Owen said after lifting the trophy. “It has been fantastic. I won a lot of trophies with Liverpool but to win the Premier League is the pinnacle of anyone’s career.”

Owen has revealed this week that he will be retiring from professional football at the end of the season, despite being just 33-years-old. The injuries that he’s picked up over the years have certainly shortened his career, and Owen has revealed that had he joined United instead of Liverpool as a youth player he would not only have won more medals, but would have enjoyed a longer career too.

“I did not have a break for years and years,” Owen said. “That is something I would advise young players now to guard against.”

Asked whether he might have had a longer career had he started at Manchester United, Owen said: “If you want an honest answer, then it is probably a yes. I had the choice to join Manchester United when I was a kid but I chose Liverpool. Yes, I could be playing a bit longer, might have had a few more medals in a pocket but who knows? I would not swap my time at Liverpool – they were my best years.”