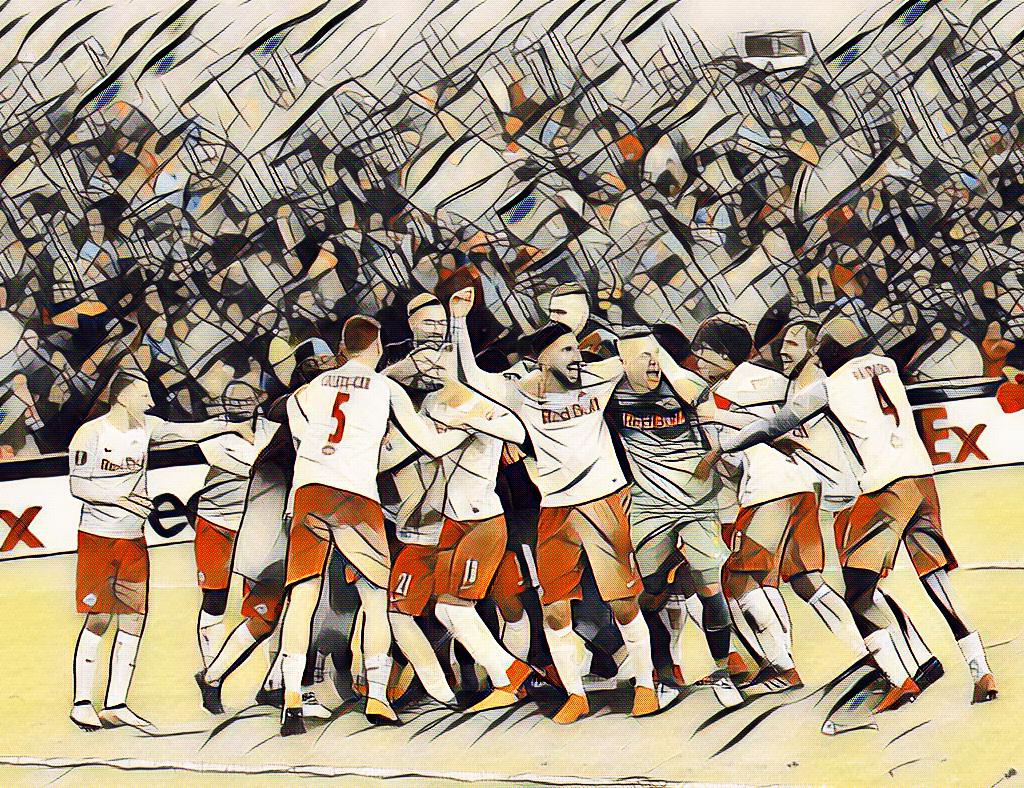 The Europa League had a lot to live up to, following the scintillating action that had been played out in the Champions League this week. European football’s secondary competition did not disappoint with some big storylines of its own. Read about all of the action from the Europa League quarter final second legs here:

Lazio had gone into this game with a two-goal lead after the first leg against Salzburg, but after their city rivals had clawed their way back from a first-leg loss, I Biancocolesti let their lead slip. It was their talismanic striker, Ciro Immobile, who had opened the scoring in the 55th minute, as he raced in behind the defence and slotted the ball into the top corner, as he showed a glimpse of why he has been regarded as one of the best strikers in Europe this season. This also took the aggregate score to 5-1. However, just one minute later Manus Dabbur struck back as his shot was deflected into the net off of a Lazio boot to level the day’s scoring. There was a lull in goalmouth action for around a quarter of an hour before Amadou Haidara’s long-range effort in the 72nd minute sailed in, starting an incredible six-minute spell for Salzburg. Two minutes after Haidara’s goal, Duje Caleta-Car curled a pass through both the midfield and defence of Lazio, with the ball falling to Hwang Hee-Chan, who finished well to get the score back to 5-5, with Salzburg going through on away goals at this point. However, they were able to once again strengthen their position, as again two minutes later a corner into the box was flicked on and Stefan Lainer, who has been so impressive throughout this Europa League campaign, produced a powerful header to send the ball flying into the net and Salzburg into the semi finals of the Europa League. Following their brilliant turnaround, Salzburg will face Marseille in the semi finals.

Already leading after the first leg, Leipzig must have been feeling confident when Bruma smashed a powerful strike into the Marseille net just two minutes into the second leg. However, in the sixth minute the ball bounced off of Kostas Mitroglou, onto Peter Gulacsi and then Stefan Ilsanker for an own goal, bringing Marseille back level on the night. It was just three minutes later when Marseille brought themselves level on aggregate. Leipzig’s corner had been dealt with well, before the French side raced up the pitch in a smooth counter attack, which ended when Bouna Sarr turning a rebound into the net. Dimitri Payet had a brilliant strike disallowed, but it didn’t matter, as in the 38th minute, his free kick found Florian Thauvin who turned it into the net. Jean-Kevin Augustin had managed to capitalise on Naby Keita’s good work to bring the aggregate score level in the 55th minute, but within five minutes the German outfit were behind again, as Payet added a brilliant solo effort to his earlier assist. In the dying moments Leipzig had brought Gulacsi up for a corner as they chased the game, but Marseille were able to clear and Hiroki Sakai put the ball into the empty net to secure Marseille’s progression to the semi finals.

Arsenal should have been comfortable in the second leg considering they went into it with a three-goal lead, but CSKA were able to give them a scare. The Russian side got their first goal of the game in the 39th minute, when Kirill Nababkin’s header was parried by Petr Cech, the Arsenal keeper dill well to get there, but could only deflect it towards Fedor Chalov who fired the rebound past him. CSKA’s second goal of the game came from another rebound in the 50th minute, as Cech couldn’t hold onto Aleksandr Golovin’s brilliant swerving effort from range, with the ball falling to the feet of Nababkin who finished it off with aplomb. Arsenal will have had a sinking feeling when they finally got the ball in the net eight minutes later from a Mohamed Elneny header, as it was ruled out for offside. However, they were able to get on the score sheet in the 75th minute; Danny Welbeck turned Nababkin, before driving forward, playing a one-two with Elneny and slotting the ball into the top corner. In the dying moments Elneny played another brilliantly weighted pass, but this time the recipient was Aaron Ramsey who ran in behind the CSKA Moscow defence and dinked the ball past the onrushing goalkeeper Igor Akinfeev. The end result looked comfortable, but Arsenal were made to work hard for their place in the semi finals, where they will now face Atletico Madrid.

Atletico Madrid have been rampant in the Europa League up until this point, but if it wasn’t for Jan Oblak’s heroics in this fixture they could have seen themselves knocked out of the competition. The pick of the Slovakian’s saves being a diving effort to save a powerful header from Sebastian Coates, which was destined for the top corner. He was beaten in the 28th minute though, when he was forced to palm away Bruno Fernandes’ cross, as it looked as if it would go in, but Fredy Montero was able to produce a diving header from an acute angle to score. Antoine Griezmann had two opportunities to put the game beyond any doubt at the end but his first was saved by Rui Patricio and the second rolled past the post. Atletico may have lost on the night for the first time this season in the Europa League, but they still progress to the semi finals.