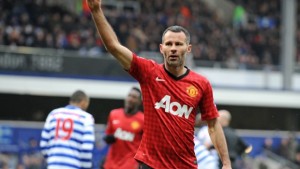 ‘He’s an incredible human being. It’s as simple as that’ – the words used by Sir Alex Ferguson to describe a player who might just get a statue or an Old Trafford stand named in his honour in similar fashion to the wily old Scot. Many within the game have even tipped him to replace the man who has managed him throughout his professional career.

As Ryan Giggs is on the verge of bringing up his millennium of senior matches, we pay tribute to a man who will go down as one of the greatest to ever grace the pitch. The 39-year-old is a one-off and it is unlikely that his combination of footballing excellence and longevity will ever be replicated.

It would be too hard to write one column on why Giggs is my favourite footballer ever, but sometimes words simply are not necessary. Here is a list of stats and figures outlining just why Manchester United, and the football world in general, will be poorer when the flying Welshman decides to call it a day.

· 1 – OBE for services to football

· 1 – BBC Sports Personality of the Year

· 6 – times selected in PFA Team of the Year

· 16 – Champions League tournaments in which he has scored

· 23 – Successive league campaigns in which he has scored

· 145 – Number of Teammates for Manchester United

· Giggs has notched up 10 league goals against Spurs, more than any other club

· He has faced Arsenal 48 times in his career

· The Welshman averages 0.18 goals per game in which he plays

· Of the 15 players with the most all-time PL appearances, the only one not to have received a red card is Ryan Giggs.

· When Ryan Giggs made his debut, Danny Welbeck was only 3 months old and Phil Jones had not yet been born.

· He is joint 7th in the club’s all-time leading goal scorer list.

· Giggs has only been on the losing side on 10 occasions in which he has scored a goal.

· Of his 4 penalties taken during a match, he has converted all 4. He also netted the winning penalty in the 2008 Champions League final shootout.

· Of the 39 clubs Ryan Giggs faced at least 5 times, Leicester City and Crystal Palace are the only ones he didn’t score against.